If you’ve been furniture hunting at auction houses or antique stores lately, you may have noticed the word “Regency” frequently showing up in item descriptions. Regency style furniture and design have been enjoying a resurgence in popularity in recent years. While it is possible to find authentic, antique Regency era furniture, much of what is on the market today are later reproductions made in the style of the time. If you’re a fan of the style and want to start incorporating it in your decorating theme, here’s everything you need to know to make an informed purchase!

The word Regency—along with other descriptors such as Baroque, Federal, Directoire, etc.—refers to a specific period in history. The Regency Era took place in the United Kingdom and began after the reign of King George III (a period of time known as the Georgian Era), who suffered a long bout of physical and mental illness at the end of his life. In 1811, a Regency Act was passed by Parliament, which declared the King unfit to rule due to the state of his health. His eldest son George, Prince of Wales, was named Prince Regent, and he ruled in his father’s stead until he was named King George IV upon the death of his father in 1820. While the formal Regency only lasted nine years, the Regency Era also includes the rule of King George IV from his coronation until his death in 1830.

Influences on Design during the Regency Era

Influential designers of the Regency Era include the architect John Nash, who served as court architect for King George IV and whose works include the Royal Pavilion, Marble Arch, and Buckingham Palace. Neoclassical and picturesque themes were characteristic of his work. Additionally, architect and designer Thomas Hope published his book Household Furniture and Decoration in 1807, which was the first to use the term “interior decoration.” Hope’s extensive travels (including the Grand Tour) heavily influenced his aesthetic, which juxtaposed the ancient with the modern. Thomas Hope advocated the use of top-quality materials, and his designs included copious use of ornamentation for a luxurious effect.

Furniture and architectural designs during the Regency Era were heavily influenced by the expeditions and archaeological discoveries of the time. For much of the British population, this was their first exposure to the styles of other cultures. The Regency Era also coincided with Napoleon Bonaparte’s reign over France, a period known as the Napoleonic Era, which saw nearly constant military conflict across Europe.

Mahogany, which was readily available in Europe at the time, remained the main wood of choice for furniture making. It is a durable hardwood, which makes it ideal for high quality and long-lasting furniture, and its rich reddish-brown color and straight grain makes it beautiful to look at: 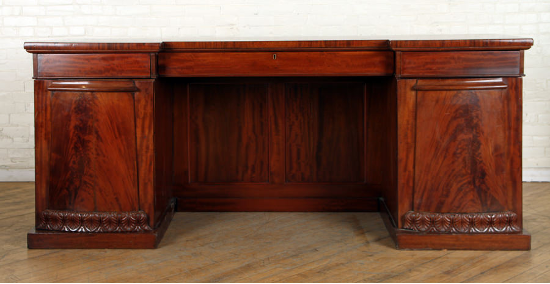 However, with expeditions to new countries and continents came the discovery of new types of wood. Higher end furniture of the Regency Era included the use of exotic woods such as ebony, rosewood, and zebrawood, which were highly polished to accentuate the wood grain and create a visually striking surface: 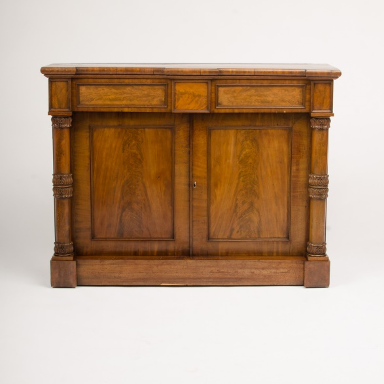 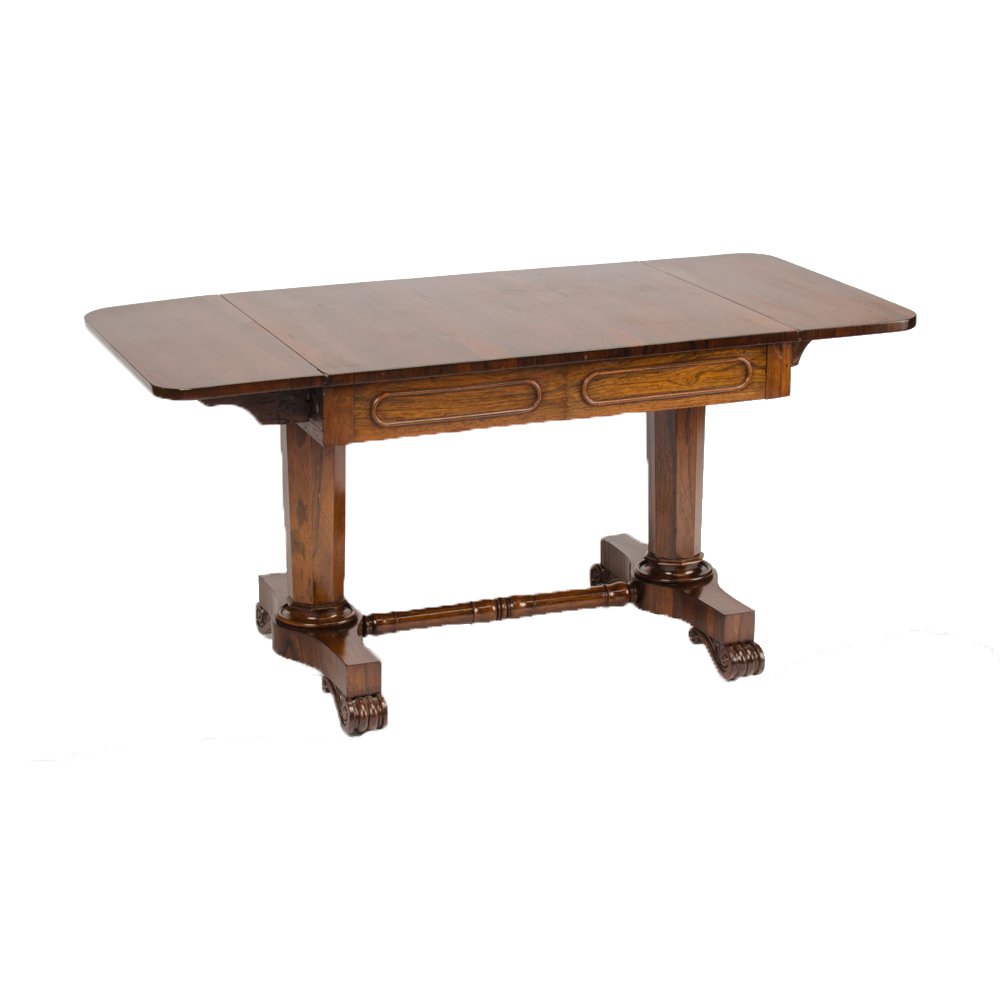 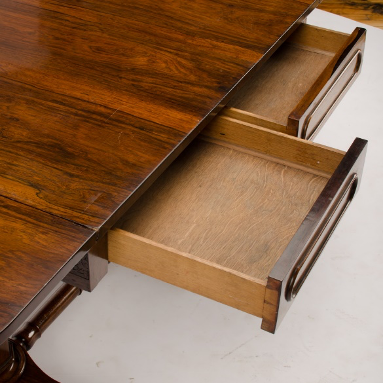 Ebonized wood also became popular during the nineteenth century. Ebonizing is a process used to darken wood to give it a similar appearance to ebony. The practice involved staining and polishing more inexpensive types of wood to create an exotic, sleek, jet-black exterior: 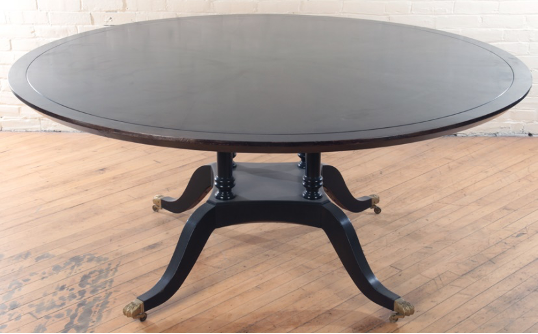 Unlike the designs of earlier periods such as the Rococo style, which relied heavily on exaggerated shapes and intricate wood carvings, the furniture makers of the Regency Era instead kept their overall designs simple. Symmetry, clean lines, and right angles came into fashion: 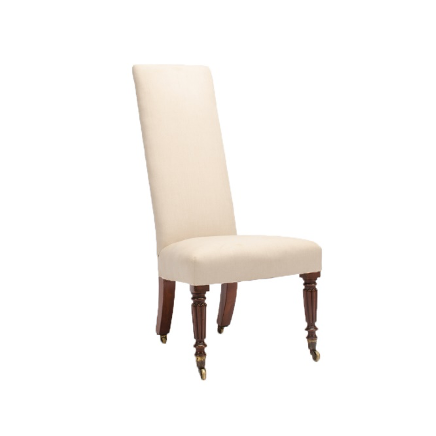 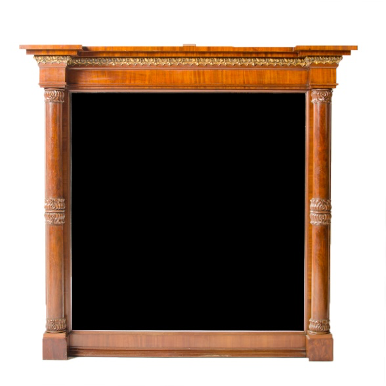 Furniture makers of the time still demonstrated their craftmanship and woodworking skills with the inclusion of signature details such as delicate sabre legs, Grecian-influenced scrollwork, X-form bases, and classic paw feet: 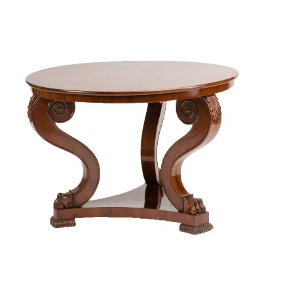 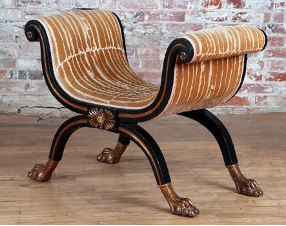 Wood carvings were still characteristic of furniture design during the Regency era, but they became far more subtle than those of earlier styles. While past furniture makers made ostentatious carved details the center of attention on their work, wood carvings were rather used as an accent to the refined shapes of the Regency style: 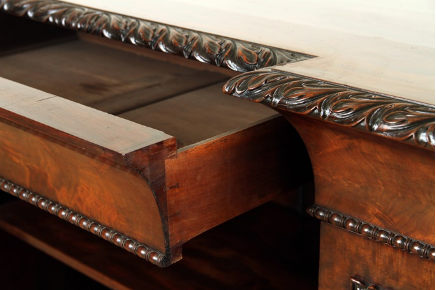 However, what really made Regency Era furniture stand out was extensive use of embellishment, made popular by Thomas Hope. Simple designs and typically dark wood surfaces provided the perfect background for applied decoration, particularly metal accents. Brass was inexpensive at the time and was often used for inlay and mounts. Gilding was also common: 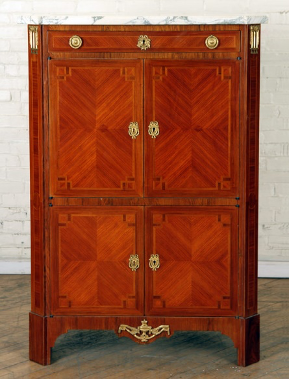 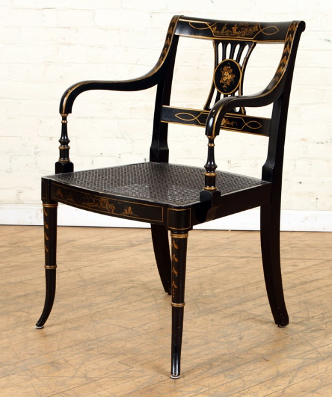 With Regency Era furniture, it’s truly all in the details. Artifacts found in Egypt during expeditions in the late 1700s led to the inclusion of mythological motifs such as sphinxes and griffins. Other Neoclassical figures like animal heads, lyres, and acanthus leaves were influenced by discoveries in Italy and Greece: 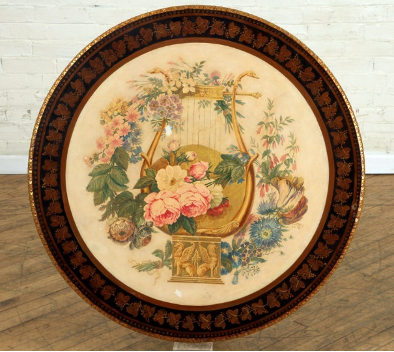 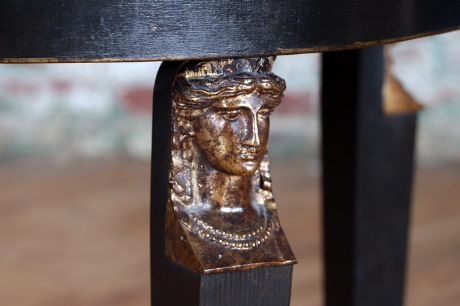 The Prince Regent himself favored Asian influences, and court architect John Nash designed the Royal Pavilion in Brighton for him in the Indo-Saracenic style. This brought exotic details such as heavily lacquered finishes and faux bamboo into vogue: 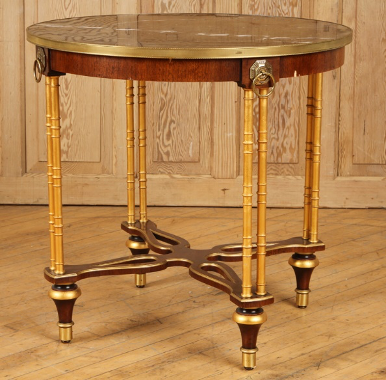 The Regency Era was marked by unrelenting military conflict during the Napoleonic Wars, including sea battles, which led to the incorporation of martial and nautical designs into fashionable décor. Sea creatures and medallions as accents reflected the atmosphere of the time: 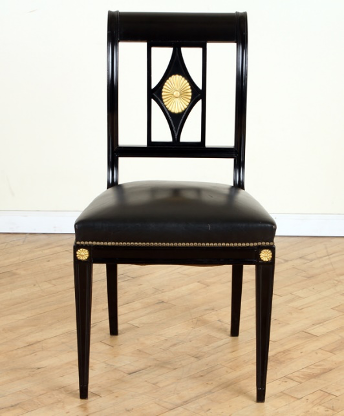 If you’ve found the flamboyance of the earlier Baroque period to be too overwhelming, yet can’t abide modern minimalism, you might find a match in the Regency style.  It is classic and tasteful upon first glance, with show-stopping details that reveal themselves after a closer look. You can find Regency  Era furniture ites with a wide range of detail level that will suit all kinds of tastes. We hope this article will help you with your next auction or antique find. Happy hunting!