Art school dropout to Mid Century giant, Edward Wormley was born in 1907 in Oswego Illinois, a rural farm town outside of Chicago. He had polio as a child and developed a limp that would accompany him the rest of his life, though never hold him back. Discovering his love of design from an early age, Wormley joined an out of state course for high school students that was run by New York University’s Interior design school. It was there he became impassioned to seek higher education, securing funds to attend the prestigious School of the Art Institute of Chicago. After two years of schooling Wormley’s money ran out and he was forced to withdraw from his classes.

He swiftly found work as an interior designer with Marshall Field & Company, a design firm in Chicago. Taking advantage of his newly found time and revenue, Wormley traveled to Paris where he met Le Corbusier, a prominent and controversial architect, and Emile Jaques Ruhlman, an Art Deco designer. This trip would offset Wormley’s earlier hardships and signal the beginning of a successful design career spanning decades. 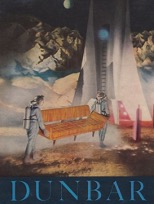 Upon his return to the United States in 1931, and inspired by his trip to Paris, he began creating sleek and austere furniture that existed in the space between Modern and historical design. Wormley’s new line caught the eye of the President of the Dunbar Furniture Corporation based in Indiana. They quickly recruited Wormley to consult on the improvement of Dunbar’s most affordable line of furniture affectionately labeled the “Borax” line as it was often purchased in part with soap box coupons. By 1932 he was promoted to Dunbar’s director of Design, assigned with managing the design and production of both a traditional and modern line for Dunbar’s annual roll out. This task was made especially challenging as Wormley did not work with automation, all of his designs were individually made. Each year he designed and distributed an average of 150 pieces of furniture for the corporation. Dunbar employed expert craftsmen, predominantly Swiss, to create these pieces. Wood was at the epicenter of his craft,, matching old world woodworking with modern sleek lines and well padded upholstery more fitting of traditional design. Wormley’s trademark of mixing historical and Modern aesthetics was aptly referred to by the designer as “Transitional” design, becoming popular due to its exciting newness yet familiarity.

In 1944, Dunbar’s Modern furniture lines became so profitable that they discontinued their traditional furniture lines altogether. With his newly found fame, Wormley left the company and opened up an independent design firm in New York City while staying on as a part time Consultant for Dunbar. In this interim he designed the infamous Precedent Line for Dunbar’s competitor Drexel in 1947. For another decade Dunbar and Wormley worked independently until 1957. Wormley returned to create what would be the defining line of his career, the Janus collection, an intervention of craft, Modern and historical design. 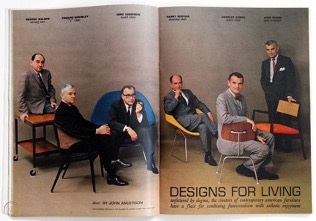 Famously incorporating elements of his own interest in collection, Wormley designed tables incorporating Tiffany Studios glass, repurposing the material as mosaic and collage that complemented the assemblage aspect of his creative practice beautifully. The Janus collection was a dominating success, landing Wormley in a Playboy spread which at the time was a leading style magazine.

Beyond commercial success many of Wormley’s works found their ways into public and private institutional collections along with his beloved Téte-â-Téte sofa and Love me Chaise, as well as being featured in high profile exhibitions and institutions such as the San Francisco Art Museum in1960 and the Baltimore Museum of Art in 1951.

Wormley later urged Dunbar to reinvent and repurpose famous historical designs for the market. Famously, his reproduction of a modern take on an iconic Riemerschmid chair was so well beloved by the architect’s heirs that they added it to their museum collection.

Wormley passed away at age 87 leaving behind his legacy and winning the Designer of Distinction award from the American Society of Interior Designers and the Elsie de Wolfe Award. Dunbar continues to sell and produce many of Wormley’s designs today and many can still be viewed in exhibitions and museum collections countrywide.